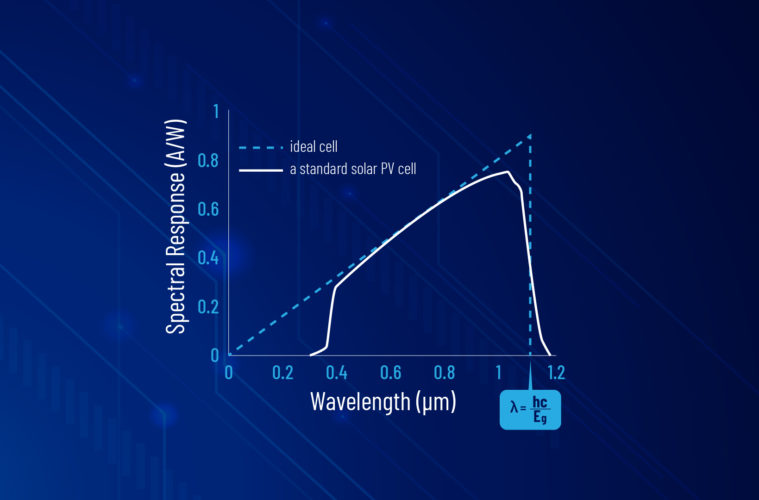 The photoelectric effect is the phenomenon of light causing a flow of electrons, i.e., current flow. Fundamentally, the phenomenon of freeing charge carriers from material by photons striking its surface is known as the photoelectric effect. The photons that strike the material give the valence electrons of the material sufficient energy to jump to the higher energy level of the conduction band. It is the electrons in the conduction band that are responsible for the photocurrent. The discovery of the effect of light on certain materials is what won Albert Einstein his Nobel Prize in physics. This photocurrent, produced by a specific material, varies with the wavelength of incident light.

Concerning solar modules, spectral response is defined as the ratio of short-circuit current density to incident illumination power as a function of wavelength. The current is typically in the micro-to-milliampere range. When plotted, the spectral response of a solar module would begin at about 300 nm and reach a peak at 700 nm after passing through a series of spikes and dips. There would be a dramatic drop-off in the response at 1100 nm—this is the maximum wavelength of light for silicon. The uneven nature of the response is since silicon atoms respond efficiently when exposed to specific wavelengths but not as consistently with adjacent wavelengths.

As per research findings, the module-temperature effect on polycrystalline modules was higher by 15%–20% as compared to the effects of solar spectral effects, at around 3%. However, for amorphous-Silicon modules, the module-temperature effect was less, with around 8% variation in performance, compared to around 12% variation in performance with the effects of the solar spectrum.

A solar module is made up of individual solar cells connected in series. The solar cells themselves are made up of silicon, a semiconductor. When sunlight is incident on solar cells, the electrons in the valence band of the silica that constitutes the solar cells are excited into the conduction band, triggering electron flow. PV cells wherein only photons that have energy equal to or greater than the bandgap of the cell material can trigger current flow are known as single-junction PV cells. The disadvantage of these cells is that lower energy photons do not trigger any current flow. To employ the energies of these lower-energy photons, multiple (two or more) different cells may be used, thereby bringing multiple band gaps and junctions into play. Such cells have improved efficiencies, as they convert a larger fraction of the incident sunlight into electrical energy. A majority of such “multijunction” cells use gallium arsenide independently, or in conjunction with other materials. As we march into the future, ongoing research in the multijunction cell arena (for example, the inverted metamorphic multijunction: IMM solar cell) looks poised to propel solar modules into a new era of higher efficiencies that can be sustained through the life of a solar power plant.