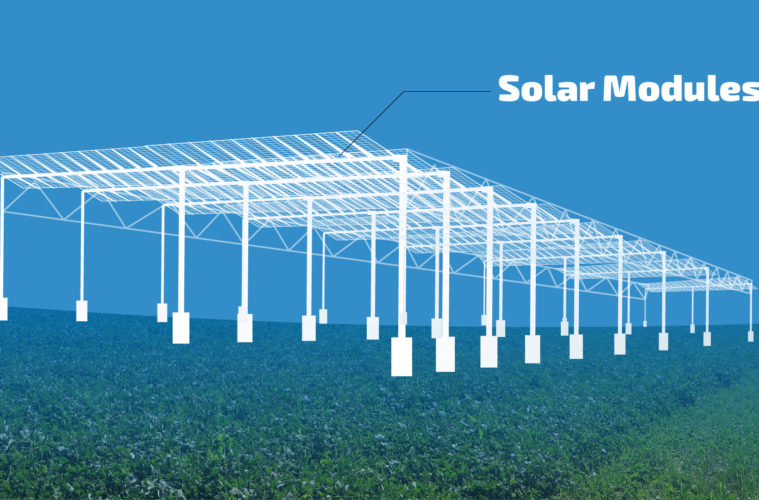 India has an ambitious target of 100 GW of solar installations by 2022. While sizable contributions to this target are expected to come from the rooftop solar systems, popularly called the roof solar and industrial solar system segments, as well as the residential rooftop PV segment, a larger contributor is expected to come from utility-scale ground-mounted solar power plant projects. With India being an agrarian country, it is important to evaluate the large-scale impact of surrendering large tracts of fertile land to mounting structures and module shadows.

As per MNRE, in FY 2017-2018, ground mount solar plant installation stood at over 25 GWp, translating to approximately 500 sq km of land under solar modules. As the ramp-up to meet the 100GW target begins, policymakers have now begun to discuss the act of balancing agriculture and the solar PV power plant system with the PV solar panel module.

Globally, the idea of solar farms has been designed. An Agro PV project in Germany has had a successful pilot run, with winter wheat, potatoes, and celeriac being tested. Agro PV has also been undertaken in Japan. The heights of the installations vary from 2.5 to 3 m above the ground.

In India, ICAR has published its findings on an agro-PV system set up in Jodhpur. This study differs from its Japanese and German counterparts in the aspect of allowing for farming only in the inter-row spaces. The modules have not been raised to a greater height to allow for crop cultivation underneath the modules. Additionally, the pilot runs incorporated the use of a rainwater harvesting channel. As part of the mounting structure, a channel was placed at the bottom end of the panels to collect rainwater directly as well as from the drip of the modules.

A common theme across all the installations is the restriction on the height of cropped plants. This becomes critical when crops are grown in the inter-row spacing; taller crops would cause shading on the modules, creating efficiency issues and triggering technical faults with the modules’ performances.

Agro PV employs expansive use of the land on which the solar power plant is installed. This would involve raising the height of the mounting structures to reduce the intensity of the shadows cast by the modules. Raising the heights of the modules would also mean increasing the inter-row distance. These changes to the standard design of a ground mount project would allow the surface below the modules, across the land area of the project, to receive relatively uniform levels of sunlight.

On the cost side, this design would also require additional expenses to account for the increase in material for the mounting structures and also a reduction in the total power that the same piece of land could produce, had standard design practises been employed. Although the yield would drop as compared to module-free farming, it is a better alternative to leaving the land idle. However, these results are merely tested runs.

The Future of Agro PV

It remains to be seen how crops and power plants will perform on larger scales, if the additional costs are worthwhile, and if, with time, their power generation capacities are affected. If the cost escalations triggered by design changes are not matched by returns-for cultivators and investors, other ideas of effective land utilization would have to be explored.

As we shift into a land-scarce world, it is crucial to ensure that tracts of land are put to efficient use. In this effort, all viable options must be carefully examined before one is chosen to be translated into a utility-scale project.